Appreciations of the Dutch

I don't know what it is about the Dutch I like so much: they seem to have all the best traits of their neighboring countries without their faults.  Like London, the thriving urban metropolis to the West and a bit South, Amsterdam benefits from its colonial history.  Even in the 1600s it was full of foreigners, and this may help them to produce a more thriving polyglot culture.  Even the variety of forms of transportation works: bicycles wiz by in all directions, even in intersections with 6 incoming roads, and pedestrians manage not to be hit by the trams, that share the same soft bell warning as the bicycles.  I did not see a single accident in the 8 days I walked about town, and although it appears very chaotic there is a great deal of civic cooperation to make this all run smoothly. Yet in England one gets the impression order has only been maintained through a sense of humor so understated, they don't know when they are being funny or not themselves, and an upper lip so stiff, they don't even know what they feel about their own lives themselves.  Not so among the Dutch, whose humor is sharply silly, but they are genuinely curious when they look you in the eye and ask you briskly what it is you want.


Amsterdam is the city where Brits go to indulge: drugs, drinking, gambling, prostitution are all legal.  Yet these sins are wrapped in such a touristy tackiness--like the cellophane wrapping around the ever-present chocolate dildos--that the Dutch seem to have somehow taken the devil out of sin.  They mean so much less, because they are not repressed.   My image of the Dutch citizen is not a stoned drunken bankrupted whoring sailor on leave--but a 6' 2" tall woman, even taller on her bicycle, pedaling hard through an icy mist along the Prinzengracht with a toddler behind the wind faring in front.  She is dodging the pile of bricks, warning clueless tourists with her bell, waving one handed to a passing acquaintance (when not texting on her cell phone) and gets the toddler to daycare in time to start her day at work. 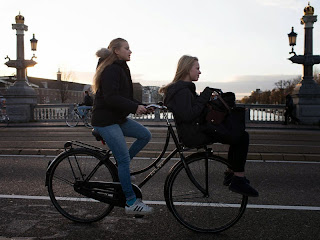 Alongside the lack of repression vis a vis sex and stimulants, there do not seem to be the perverse safety regulations common in the US, that are really means of mitigating law suits and don't make us safer at all in practice.  The police are there, but aren't enforcing much of anything, and even the airport security was very brisk and just wanted everyone to get through.  The Hague is nicknamed the legal capital of the world, with the international criminal court among others, yet somehow the lawyers do not seem to have taken over as they have in the States.  Everyone jaywalks a little, cuts a bit in line, smokes a bit when they shouldn't, and blocks the road with their contraptions for lifting furniture to the hook hanging from the queen's post above the 5th floor apartment. 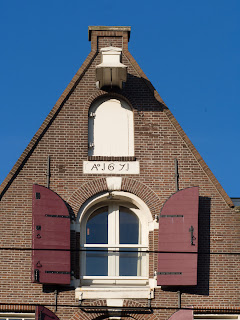 I was going to compare this attitude to regulation to that of its neighbor Germany, where everything seems to be verboten and strict adherence to systems is maintained not so much out of practicality as out of aesthetics.  But I am not even sure that Germans behave this way anymore--at least my own German family doesn't--but where the Dutch and the Germans do seem to differ is in their eating habits.  Like midwesterners in the U.S. Germans seem inclined to be fat--possibly because of the beer and sausages they have in common--and when they are not fat, they are teetotallingly scrupulous in their health and exercise regime.  An active lifestyle and strict diet, painstakingly researched and taught to anyone who will listen, may make them world class athletes--but it seems to take all the fun out of eating and playing, the childish pleasures that keep kids healthy. 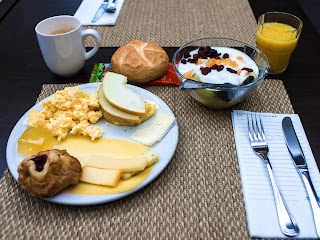 In theaters the typical treat is a beer and popcorn, and because opening a Grolsch bottle makes a little pressurized pop, the audience always includes a couple pranksters who open their beer to accent an onscreen pratfall, or a tacky moment of machismo, a peek at a boob, or whatever.  Just a silly pop, but it sort of epitomizes the spirit of drinking in the country, less about getting drunk than having a good time.  It may just be because they are all so fucking tall they couldn't get fat without falling over, but even though the Dutch are nibbling on their cheesy and sausagey spicy snacks and drinking their Heinekens, they never seem to over do it.  Their idea of a health store is really more of a con--dead sea crystals, energy seeds, etc.--which are bald code for drugs and aphrodisiacs.

The last comparison, and the one I am least well equipped to make, is between the Dutch and the French.  I have only been to Paris once in my life (France twice) and I spent the whole time throwing up from food poisoning, so this has colored me, I should say prejudiced me, against the French unfairly.  There is no doubt that their clothes and food and art and wine are the best, but because they also know they are the best, their personalities are the worst.  And this spoils, instead of improving the vintage.  Even when they are scolding, in contrast the Dutch are smiling.  Unable to read the word "duw", I would pull the door to the theater and the man behind me would say "yep, duw" with only the briefest impatience while he waited for me to figure it out.  I am not going to furnish examples of how the French treat those who do not master their language.

Although I don't typically give a hoot for fashion, I admire the fashions of Dutch women, wrapped in scarves with fur trimmed hoods and braids wound into upwardly mobile hairstyles--their penchant for colors like wasabe, mustard, and pale reds and oranges.  Even the safety cord, which trails around the walls of public bathrooms about a foot off the floor, so if an elderly person falls and can't get up they can pull the alarm--even this cord is a beautiful red braid so I thought it was a christmas decoration for the longest time.  The hook hanging from the queen's post that allows, with a bicycle wheel pulley, heavy furnishings to be lifted and pulled through the 5th floor window, is a similarly elegant design.  And what the Dutch Masters are most famous for is not their fine feeling, but their technical virtuosity with light and the rendering of shadow--values appreciated today among illustrators and photographers more than fine artists.  None of this is going to get the Dutch into Vogue, but it does make me happy. 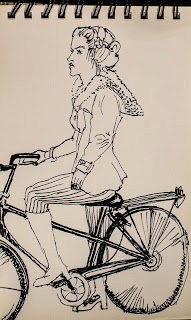 During the deep freeze in 2012 the Dutch got back out on their canals to ice skate.  It was the first year since 1997 that they were able to carry out the traditional 11 cities ice race ("Elfstedenstocht".)  Global warming and rising waters are a basic fact of life in this country, where 25% of the lands is below sea level, all sub-basements are fit with sumps, and only expensive feats of engineering and well organized water boards have kept them above it all.  So this is the image I will end with...

Photograph via cafeteriafraiche on Reddit
Posted by C. Seligo at 11:56 AM No comments: